Your Author and Dillon Sarnelli on the Summit of Uncompahgre (14,309′)

Sometimes life throws you a curveball.  It’s been about 2 years since my last post, and not coincidentally, a lot has happened in that 2 year span.  First, my wife and I were blessed with the birth of our daughter in August of 2015.  This definitely put the brakes on my 14ering and backcountry skiing, especially since most of the 14ers I have left are over 3 hours from my home.  Then, in February 2016 on our annual ski trip, I blew out my knee on the first day of the trip.  My ski season, and most of the summer 14er season, were essentially over.

Fast forward to September, my rehab has been going great and the weather looked good.  I called up my friend Dillon to see if he’d be open for a last-minute trip to Lake City.  My plan was to head down Sunday night before Labor Day, camp at the lower trailhead and get up Monday for an early summit bid.  I had no idea how my knee would hold up, or if I would even summit.  All I knew was I wanted to give the knee a test drive to see how it would respond.

Dillon and I hit the road from Denver around 7pm Sunday night and got to the lower trailhead around 11:30pm.  Our plan was to sleep in the car, get up early and hitch a ride to the upper trailhead.  The 4WD road to the upper trailhead was a bit too burly for my vehicle so we were hoping we could find a fellow climber willing to give us a lift.  We overslept past our 5am wakeup, but it ended up working out great. The guy in the car next to us was leaving at 7am with his friends, and they just so happened to have room for us. Thanks Chuck, Kurt and gang!

Once to the upper trailhead, Dillon and I said good-bye to our new friends while they prepped and we began the ascent around 8:15am.  The weather was perfect, not a cloud in the sky as we wound through the trees of the lower trail.  It was only about 10 minutes before we broke tree line and were treated to a nice view of our objective. 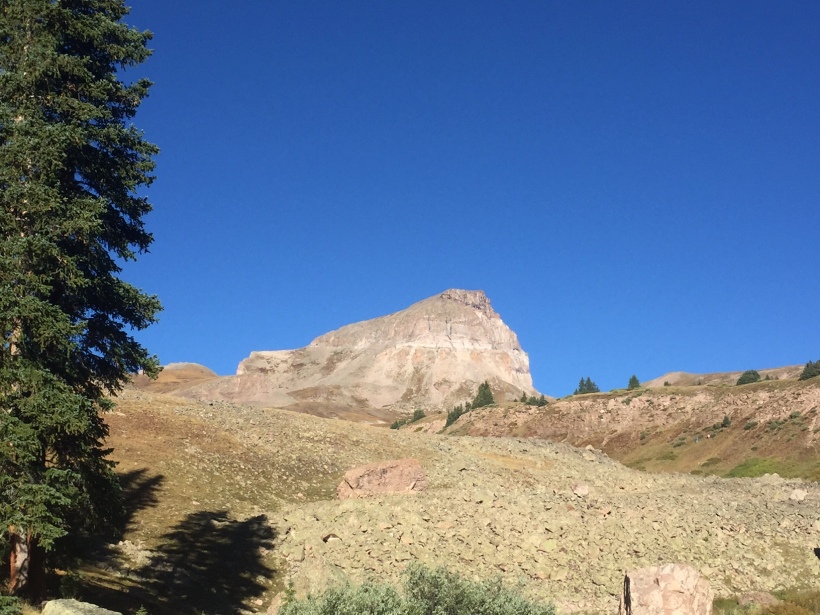 From here the trail is pretty straight forward.  It winds to the climber’s left (south) of the peak and once atop the ridge, turns east up the shoulder.

At first I was a little timid with my knee, not wanting to push it too hard.  But it seemed like the higher we climbed, the stronger it got. 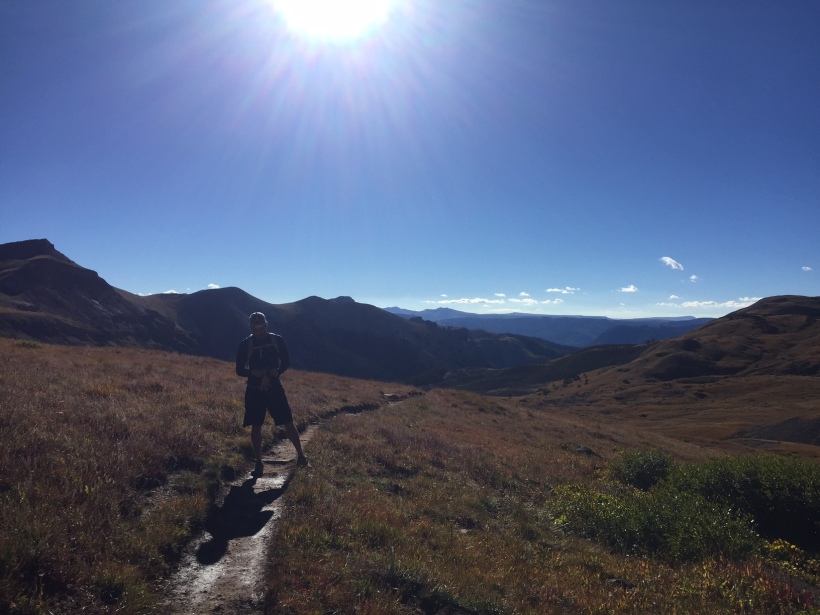 We made our way up the ridge and as we crested, we were treated to some awesome views of the surrounding San Juans, and some brisk wind.  The wind would come and go as we climbed the ridge, depending on whether we were on the windward or leeward side.  When it was blowing though, it cooled us down considerably.  Eventually we made a few switchbacks and came to the scramble and crux of the route: A short scramble through a gully up some looser rock.

Looking back on the route as it follows the ridge line. (Photo Courtesy of Dillon Sarnelli)

Crux of the route. A short climb then a scramble up the gully right of the chimney (or phallus) looking rock right of center.

My knee felt a little uneasy on the scramble, only because I knew if I slipped, my left leg wouldn’t be able to catch my fall.  So I just took it slow and carefully made my way up through the narrow channel.

Once through the scramble the trail mellowed out and it was a gentle climb to the top.  We were surprised it only took us about 1:45 to summit.  As it turned out my bad knee had held up just fine! 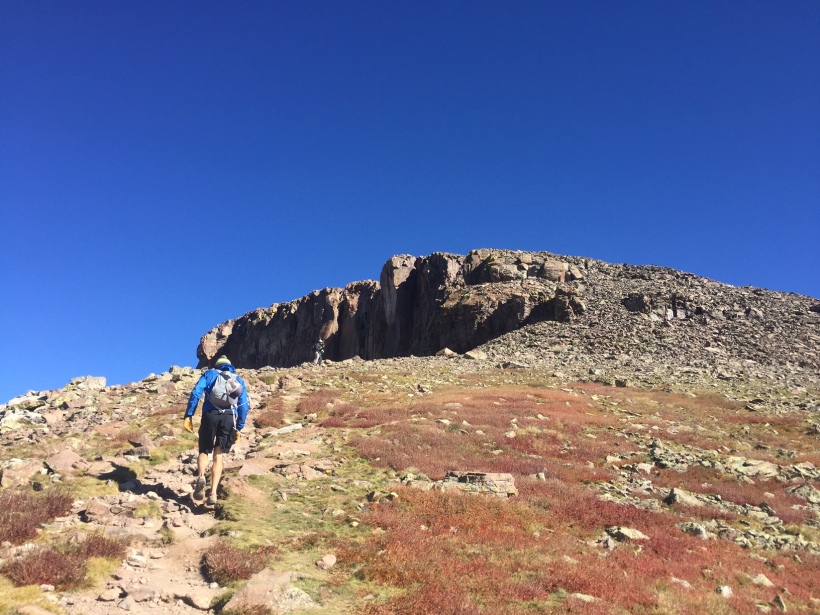 Dillon on the final push to the summit

Once we reached the summit, we were shocked to find the wind was non-existent at the top.  All we had to do was take in the views and re-fuel.  The summit of Uncompahgre is dramatic.  Not only does it tower above the rest of the beautiful San Juan range, but the east and north face of the peak drop off in a huge cliff.  The views and drop are incredible. 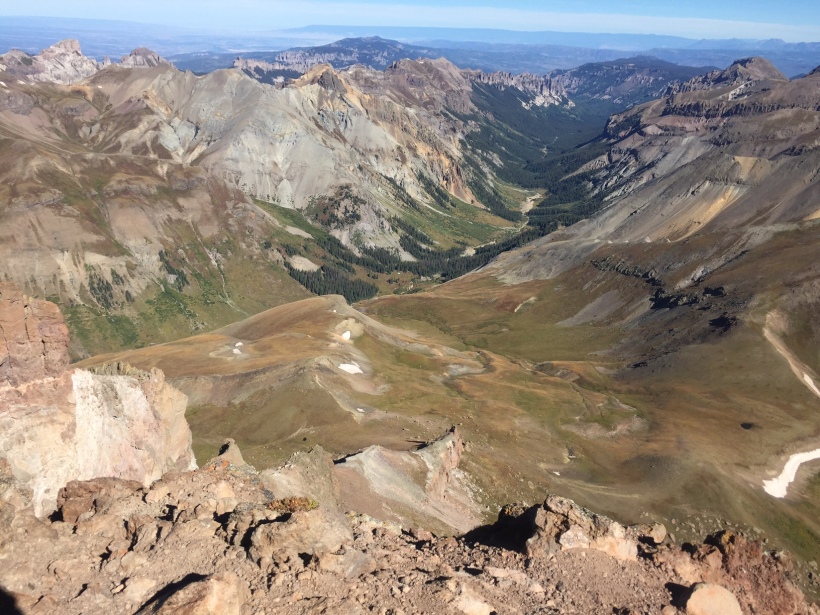 View from the summit looking North. The Grand Mesa is visible in the distance. 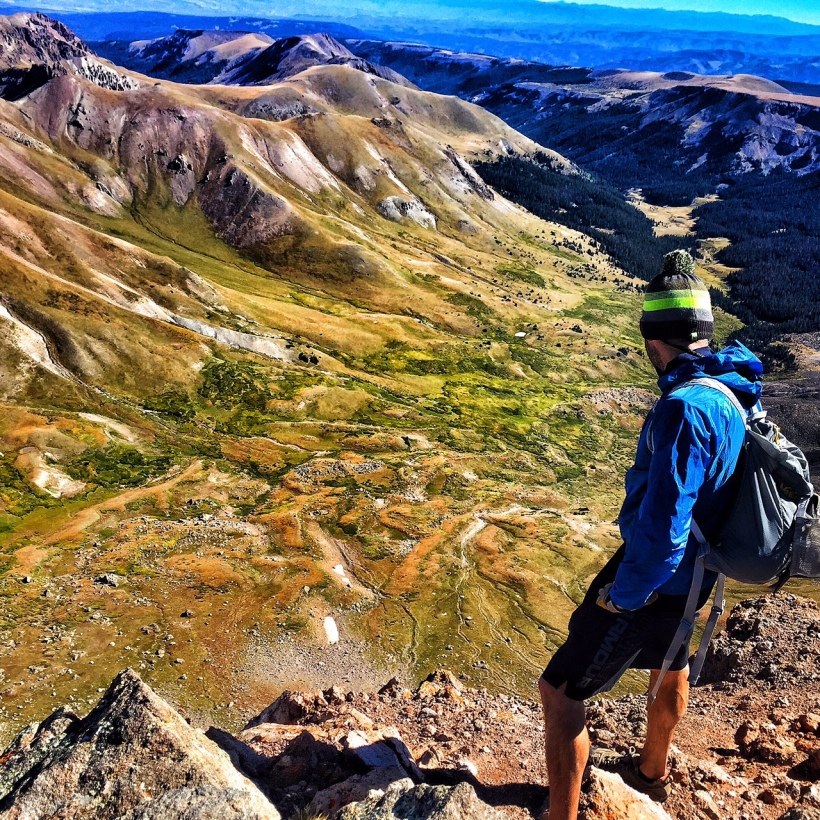 Dillon looking east over the edge, that’s a LONG way down to the valley below. 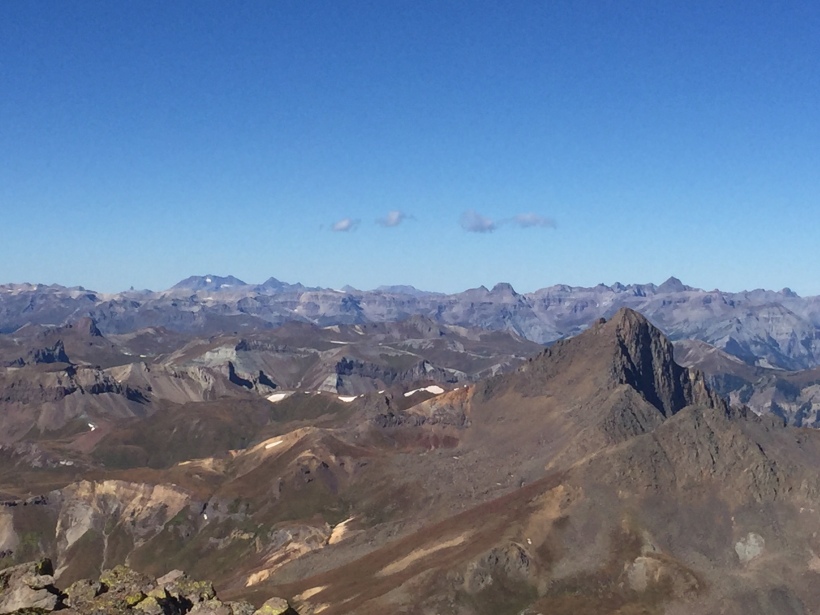 After a quick snack we set off down the mountain.  I took it slow to avoid putting undo stress on the knee, but we actually made pretty good time on the return trip as well.  We made it back to the trailhead just as a guy and his son were heading back down the road.  Score!  “Can we hop in?” I asked.  “Sure” replied Rob, “We had planned on bringing someone down anyway!”  After a good conversation and a fun ride down a rough road, we were back at the lower trailhead.  We enjoyed a beer and the sun before making the trip back to Denver.  All in all, it was a great climb.  It felt great to be back outside and in these amazing mountains.  Special thanks to Dillon for joining me and making it such a great trip.  Until next time!

I'm a Husband and a father. I love food, travel and fitness. My mission in life is "To be free to live life on my terms, while providing value and to kindness to others."

3 thoughts on “Uncompahgre – Back in the Saddle”