It has been about 3 weeks since our descent on Mt. Neva and Jon and I were certainly itching to get back into the backcountry.  I was thrilled when he contacted me earlier this week and let me know there was still plenty of snow up around Hoosier Pass.  I was especially excited since I could see the snowpack in the Indian Peaks withering daily from my 3rd floor apartment.  But, there always seems to be snow somewhere, especially for those who are willing to go get it.

We left Denver on Saturday at 5am, Jon was right on time so I knew he must be stoked!  We arrived at the trailhead at 7am and believe me when I tell you IT WAS NOT WARM.  The thermometer read about 40 degrees and I knew this wasn’t going to be a typical July descent!

As we began the hike I was feeling good but had no idea where exactly we were going.  Jon took the lead and we ascended the valley towards Wheeler Lake.  We passed some old mining equipment and were chasing a few white tail deer, but the trail was pretty much devoid of people.  The hike offered some great views of both Lincoln and Democrat.  Democrat still had some skiable lines off its north face.  However, our route took us north up to the Lake.  We did see a couple ladies on the trail, but they didn’t seem too enthused, or bent on reaching Clinton Peak.

The weather was a little cloudy too, and we wondered what we might be in for, but for now things looked ok.  At the Lake we turned west and ascended a series of benches that brought us into an alpine meadow below the Traver, McNamee, Clinton bowl.  We also had a clear look at the Lewinsky Slot, which Jon so eloquently dubber the sweet line of snow skirting the northern edge of the cirque.

We discussed the possibility of skiing Clinton, and then hiking back up to do the Slot, which seemed like a pretty good idea.  Once we got to the bottom of Clinton, we stashed our boots at the Lake, where we would pick them up after the descent.  The plan was to hike back up to the slot in our AT boots to save time.  Right about now Jon broke out his crazy red wind pants and for a second I thought I was ski-touring with the Kool-Aid man!  This notion was corroborated further with the frequent “OH YEA!” Jon would exclaim as we were heading up.  It was hilarious, but I guess you had to be there.

We hauled up the ascent route with ease and once when we got to the top it was only around 10am.  Jon looked at me and said “Hey, we can climb all three of these peaks and ski two lines!”  McNamee, Traver and Clinton are all connected by a ridge and all sit at just below 14,000 ft (Clinton is at 13,857.)  The trifecta is usually done all at once, so not to be outdone, Jon decided we were gonna knock off three 13ers while we were up there.  We first ascended McNamee, then headed over to Traver, and as we did the weather began to deteriorate.  We were actually being snowed on at times and I was amazed how cold it could still be at altitude in July!

After climbing Traver we began heading back towards Clinton.  I was beginning to feel the altitude.  Jon on the other hand looked like he was going for a walk in the park.  We kept a good pace and by about 11 we were at the top of Clinton ready to drop in.  The descent was a nice cruiser with some firm snow which jostled me around a bit – as you’ll see in the POV.

Jon made it look easy and made a total of 3 turns I believe and we were back on the uphill headed for the “Lewinsky Slot.”

Unfortunately I’m technically retarded and we didn’t get any POV of the slot, but the line was SICK.  It was a well filled-in couloir with variable snow.  We had a little ice, and some soft snow, but I couldn’t be happier with a double descent in July!  We both finished reeling from the day – 3 summits and 2 descents. 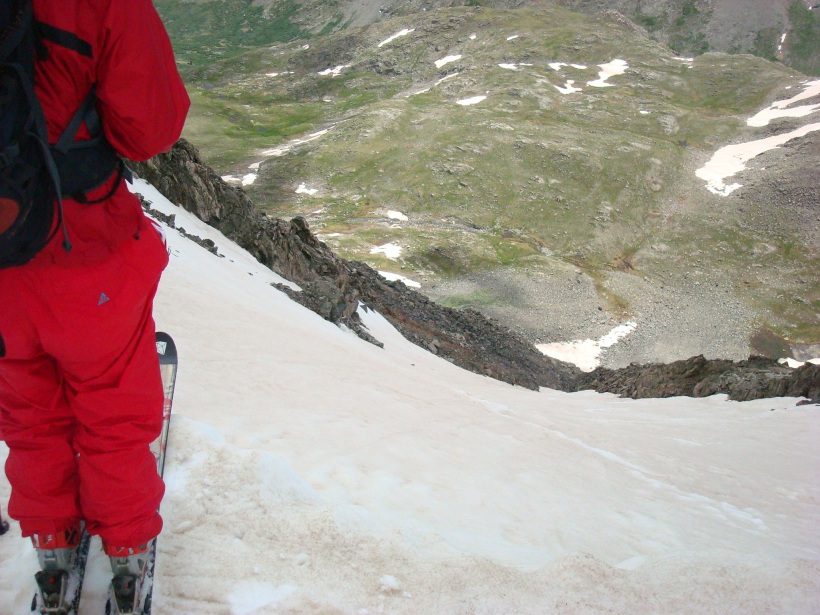 Jon about to drop into the “Lewinsky Slot”

Finished with the Slot – Photo Jon

As we hiked out there were a lot more people on the trail who had come up in their jacked up 4WD vehicles.  As we passed a group of about 8 Jeeps the weather finally turned and began to rain on us.  It rained for the duration of our walk out, about 2 hours.  By the time we reached the car I was soaking wet, my hands were numb, but I was still grinning ear to ear from the day we just had.  The beer Jon brought made it even better!   Until next time, take care.

Check out Jon’s take on his blog, Jon Jay’s Travels!

I'm a Husband and a father. I love food, travel and fitness. My mission in life is "To be free to live life on my terms, while providing value and to kindness to others."

One thought on “July Ski Session: Clinton Peak and the “Lewinsky Slot””